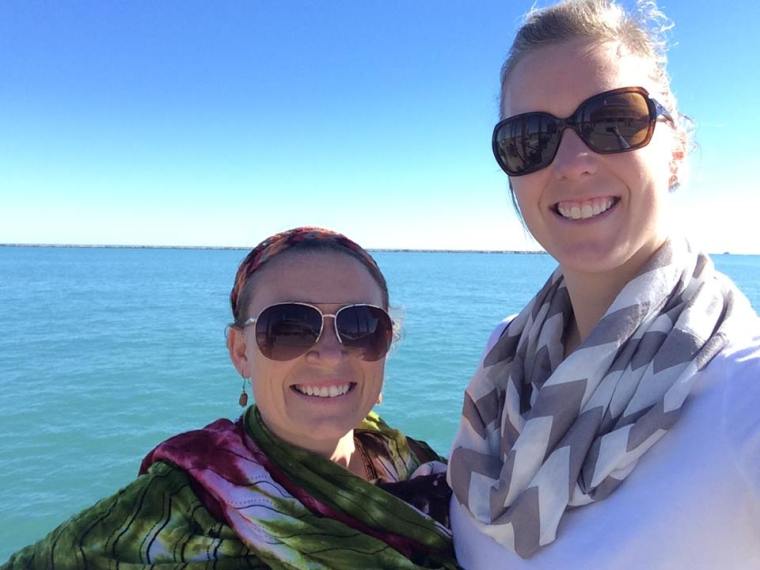 Kieara didn’t respond to my message about my friend knowing Lance Bass, the spikey-hair blonde of NSYNC.

It was a kind of weird text message to send, but I thought it would make her smile. That’s my goal in every conversation with her. I recently made a joke about male genitalia, not because it’s something we often joke about but because it’s good for a cheap laugh. I want her to smile that much.

I sent her another, this time with a question about helping her set up a blog. Still nothing. An hour and a half after I sent the unanswered text messages, I am searching every single one of her social media profiles to see when she was on last. Then I check profiles of her mom and sister. I want some indication that my friend is OK.

We met in college, when a mutual friend introduced us. Kieara had transferred from a college in Vermont to South Dakota State University during my sophomore year. Kieara likes to tell the story by saying that she did not like me at first. I’ve had several people say that, so I guess I am not good at first impressions. However, we started hanging out more and by the end of that semester we were great friends. We even moved in together our senior year, sharing a four-bedroom with two others, both named Laura. We spent whole evenings commenting on each other’s Facebook photos and having intimate conversations over MSN messenger. Occasionally we took road trips to Minneapolis or Sioux Falls, sharing sides of ourselves that others didn’t get to see.

Kieara was there for me when my college boyfriend and I broke up, driving three hours to see me in the town where I was doing my internship. She was there to make sure I got home and got to bed on nights that I had too much to drink. After college, when I moved to Africa for three and half years to be a Peace Corps volunteer, she sent me letters and books. I don’t really remember any time that I was a good friend to her, but I can recall all the times she was to me.

Now, both 31, her living in Maine and me in Chicago, she is always there for me when I need her, whether it’s helping me pick out a mattress cover or giving me a pep talk after the latest online dating disaster. The first time I saw her after returning home from Africa, we talked straight for three days. It felt like we had found a secret key back to our past friendship and we could revive that trust and connection in our current lives. We aren’t friends that need hard face time, but when we get it, often just once a year, our friendship finds its familiar tune.

On the Saturday after Thanksgiving I was in Southern Illinois with my new boyfriend, Ethan, meeting his family. It had been a long time since I met a man with whom I wanted to explore a future and, while he had met my friends in Chicago, I was anxious for him to interact with people who’ve known me for years. Kieara was the first. A month before the holiday, Kieara had been in the city for a work trip and I cleverly planned to meet up with her when Ethan and I were out running errands.The relationship was still fresh and I wanted her reassurance. She approved of our relationship before my mother could.

The morning Ethan and I were supposed to drive back to Chicago after the holiday, my boyfriend’s recurring back pain surged. We decided to take him to the emergency room. The nurses led him back to one of those rooms where I force myself not to visual what is happening, and I turned to the waiting room, preparing for a long day. That’s when my phone beeped.

I scanned the message and then looked up from my phone. Wait, what? I looked back at the phone and cherry picked words and phrases.

“Don’t want to bother you.”

It’s cliche to say that it felt like a dream but it most certainly didn’t feel real. Two people I love the most couldn’t really both be in the emergency room, could they? Surely, like Ethan, Kieara will be fine, I thought as I replied and waited for more of the story.

After working a nightshift, Kieara woke up feeling tingling on the right side of her body. Thinking she might be having a stroke, she called a co-worker to take her to the emergency room. But it wasn’t a stroke. Scans revealed a tumor on her brain, which later she found out was the size of a chicken egg that had been growing inside of her for years, perhaps as long as 10.

Two weeks later, both Kieara and my boyfriend had surgery. Ethan needed the kidney stones removed and Kieara the tumor. While it’s quite unnerving to see the man you love with tubes in his nose, I knew he would be OK. That was the difference between him and Kieara, though. I didn’t really know if she would.

Bad news isn’t supposed to appear on your doorstep before Christmas, but it did. Stage Three Cancer.

Before her official diagnosis, I hadn’t heard much from Kieara. I tried to call her once and she didn’t pick up, but I didn’t expect her to and I told her not to worry about calling me back. I wanted to know so much, but I would have to accept the small snippets she had given me as enough. This time, I wasn’t going to be able to control the situation and no amount of information would change that. I had no choice but to live in uncertainty.

After her diagnosis, Kieara started to reach out more. She sent me a picture of the incision on her head and told me how she was completely awake during her brain surgery. Later I saw scans of her brain revealing a large chicken egg inside of her skull. She gawked at the price of medication, but rejoicing in the excellent care of her intelligent and capable physicians. We talked about her treatment plan and when I could get out to Maine to be her caregiver for a week.

Thirty-one year olds shouldn’t have brain cancer, especially not healthy ones. They should be fretting over what to wear on a first date or wondering about the next career move. They shouldn’t be on alzheimer’s medicine and they shouldn’t have to run over every decision they ever made to see if there was anyway the could have prevented this. But that’s Kieara’s fate.

Kieara and I have been friends for more than 10 years and our relationship is nothing like friendships of women in their 30s glorified in movies and TV. We’ve had points when our lives took sharp turns against each other that it would have been a natural end to our friendship. It never was. Any pettiness faded as we’ve gotten older and now each time we come together we thrive on the true foundation of our relationship, the things that have allowed us to be friends for so long.

I am scared to death about what the future holds for my friend, so much that most days I do not allow myself to entertain thoughts of those scenarios. I try to put my emotions behind me and be the best friend I can. For several weeks, I forgot how to communicate with one of my oldest and dearest friends. I asked several other friends and Googled “What do you say to your friend who has cancer?” I didn’t find anything I didn’t know.

Each time we do speak, the anxiety washes away. Those what-ifs are pushed back into the corner of my brain where I don’t have to deal with them at the moment. Our friendship is different now with cancer sticking it’s ugly head into it, but it’s still there. And even if she has cancer, she is still my confident, independent, strong, smart, beautiful friend.

We mostly communicate through text message with the occasional phone call. It’s easier that way, for both of us. We can acknowledge cancer’s presence but we refuse to disrupt our communication habits. We had long text message conversations before cancer and will continue on after.  It’s our small way of rebelling against it. When Kieara messages me, it doesn’t matter what I am doing; I make room for her in that moment. These messages are all I have with her for now and I want to extend and value them as much as I can. Until I can see her. Until I can wrap my arms around her and laugh in that goofy way that kept us from doing homework all those years ago.

When I don’t hear from her, like on the day of the Lance Bass text message, the horrendous possibilities have room to flourish. One devastating scenario after the next. I imagine what I will do and say when my biggest fear comes true. Once the flood of worst case scenarios start, it’s hard to stop them.

But, while Kieara’s prognosis is unknown, it’s not a stake in the ground to mark the end. It’s still treatable with intense chemotherapy and radiation and, plus she’s young and otherwise healthy, making her a prime candidate for top-tier hospitals. Also, she is Kieara and she is stubborn and strong and iron-nerved. Even brain cancer can’t take her down without trying its absolute damnedest.

For me, this is my chance to return the long hugs, the ‘XOXO’s and all the times she reminded me how great I am. I don’t think I can be as good of a friend as she is to me, but I am going to be the best friend to her that I can be. She deserves at least that.

Before I go to bed, my phone buzzes. It’s Kieara. It was a crazy day but with good news about a possible treatment option. It doesn’t matter what she has to say at this point because my demons have now been silenced. Hope will guide me into the next day.

You can read about Kieara’s journey here.